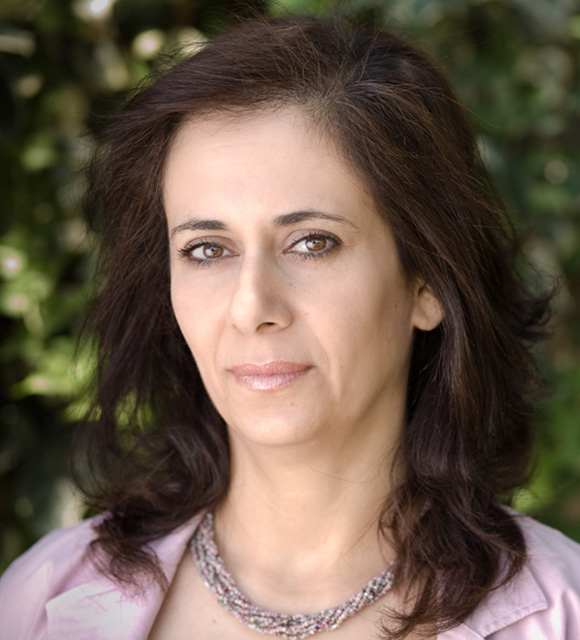 Rula is the Education and Outreach Director, Palestine at Just Vision, a nonprofit that highlights the power and reach of Palestinians and Israelis working to end the occupation and build a future of freedom, dignity and equality. In her role Rula organizes events, interviews peacebuilders and nonviolence activists, and maintains contact with educators, journalists and community leaders. As one of the producers of Budrus, she played a key role in interviewing film subjects and coordinating film crews. She spearheaded the creation of the Encounter Point Arabic screening guide, the first screening guide of its kind in Arabic. She has also organized and led training sessions for facilitators interested in using Just Vision's materials.

In her prior work as a journalist, Rula covered issues pertaining to Palestinian society and the broader Middle East. She was one of the founders of the Palestinian Broadcasting Corporation in 1993, following the Oslo Agreement. She has served as the Middle East Liaison for the organization Peace X Peace, as the Project Coordinator for Middle East Nonviolence and Democracy (MEND), and established a computer lab and children's library in the Aida Refugee Camp in Bethlehem through her work with the Irish NGO, Refugee Trust International. Rula holds an international diploma in Computers in Business and Management from Cambridge International College, and attended Birzeit University in Ramallah. She is a member of the International Federation of Journalists and sits on the Board of Palestinian Friends Without Borders.

Rula also works with a local press agency, Ma'an News Network in Bethlehem - Palestine as a senior producer, and since August 2011 has been a TV presenter for a weekly TV show on Ma'an's Satellite Channel. After 3 years, the TV show was registered as a NGO in Palestine and now the show is one of the most popular programs in Palestine. Rula was elected in 2007 as the Head of the Board of the Jerusalem Center for Women in East Jerusalem and served for 4 years.